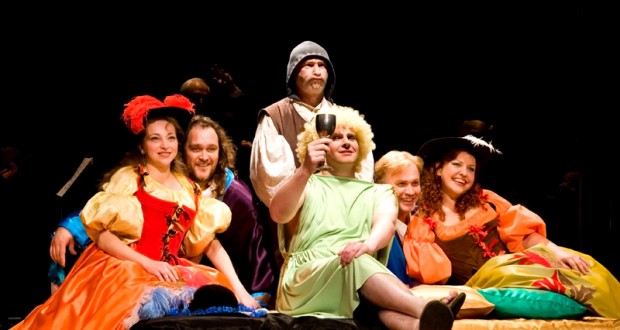 “Aeterna Opera” was created in 2003 under the auspices of non-profit organization Musica Aeterna is based on a 10-year experience of an outstanding choir called Musica Aeterna as well. Creation of such a theater became possible due to the financial support of Center Of Integration of Repatriated Artists.

During this time Aeterna Opera has produced 11 brilliant operas, which are now known for gorgeous sets, professionally designed costumes, outstanding orchestra and great actors and singers have attracted great crowds of opera-lovers to theatre Han, which serves as a stage home to Opera Aeterna. While every show has been a sellout, due to budget shortages repeat performances cannot be staged and, as a result, hundreds of potential spectators have to be turned away.

Among their major goals, theatre founders and administrators include creation of new employment opportunities for artists-repatriates as well as others in Jerusalem, making the city an attractive cultural destination to tourists, but also to new potential inhabitants (opera employ up to 100 professionals of different skills – from carpenters to chamber musicians), and, undoubtedly, enhancement of our capital’s cultural life. It is next to impossible to find anywhere in a civilized world a country’s capital without its own opera theatre or its own professional choir. Creation a professional theatre of chamber opera does that all for Jerusalem.

Beit Jamal Monastery – every Saturday at 12.30.